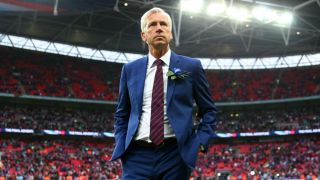 Crystal Palace boss Alan Pardew wants to manage England, but does not believe now is the right time to take the role as he has penned a new deal at Selhurst Park.

After Roy Hodgson resigned following the Euro 2016 exit at the hands of Iceland, Pardew was initially considered as one of the primary English candidates for the position.

The 54-year-old guided Palace to their best finish of 10th in the 2014-15 Premier League and, although they came 15th last season, the London club were runners-up in the FA Cup in May.

Pardew wants to manage England in the future, but his immediate ambition is to help Palace improve next season.

"I want to be the England manager. It is a job I aspire to and it is an ambition of mine. But not now," he wrote in the Daily Mail.

"I have signed a new contract [at Crystal Palace], we have new, ambitious American investors and with my chairman Steve Parish we all want to attack this division.

"I do hope the Football Association will want to talk and I have strong opinions on England, but I have been asked if I want the England job and I have given my answer.

"It might be that I am considered too inexperienced at international level so I am prepared to work for another nation to get that experience when the time is right, if that is what is required. But for now my time is at Crystal Palace."

Pardew believes England need a manager who can give the team an identity, suggesting Arsenal boss Arsene Wenger could be the right appointment for the Football Association (FA).

"We need a new manager and a new outlook. I feel the new manager needs to bring experience. I've read names mentioned, such as Eddie Howe, who I'm sure will be a very good England manager of the future. But he is not right for now, either," he continued.

"There is no outstanding candidate and, while I would like to see an English coach given the chance — we are a dying breed at the top of English football — the FA need to make sure they get the right man.

"The England fans — and I'm one of them — need to be behind the man the FA choose. And I can see why Arsene Wenger would be that man.

"Playing for England cannot be second-class compared to the Champions League. Players would want to play for and learn from Wenger."