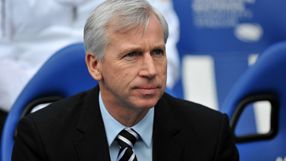 "We're not too big to go down," he told reporters after Newcastle's 11th defeat in their last 14 matches in all competitions.

"I think it is important to spend... the most important thing for us is our Premier League status now because we've put ourselves at risk with all the injuries and the run we're on. We need to make sure we're a Premier League side next season."

Newcastle, fifth last season, are two points above the drop zone in 15th place and have qualified for the Europa League last 32 where they will play Ukraine's Metalist Kharkiv next month.

They fielded a below-strength side against Brighton due to injuries and absence, with Ivory Coast midfielder Cheik Tiote on Africa Cup of Nations duty while striker Demba Ba signed for Chelsea on Friday and scored twice on his debut.

First-team regulars Fabricio Coloccini and Papiss Cisse were also among the absentees after picking up minor knocks in midweek.

Pardew said after the Brighton match that Newcastle lacked quality on the pitch and were a shadow of the team he would have liked to put out.

In one glimmer of good news, the club signed French international defender Mathieu Debuchy on a five-and-a-half-year contract on Friday.

Newcastle fans also received support from Manchester United manager Sir Alex Ferguson, who had last month described the Magpies as "a wee club in the North East" after United beat them 4-3 in the league.

"I have nothing but the highest regard for Newcastle fans and I always have had," the Scot told the Mail on Sunday newspaper, clarifying his comments.

"They are up there with the best supporters in the game. Their passion, commitment and fervour have never wavered, even though they have had little to celebrate.

"If Newcastle's achievements had matched the support of the people who pay to watch them play, the club would be among the game's giants. It's tragic that they haven't been able to win a league title for over 80 years."