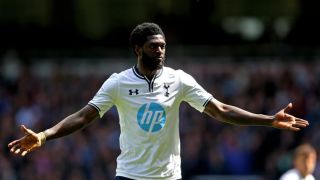 Alan Pardew believes Emmanuel Adebayor could use Crystal Palace as a stepping stone to one of Europe's elite clubs.

The Togo striker had been without a side since his release from Tottenham in September, but moved to Selhurst Park this week on an performance-based deal.

Palace manager Pardew is positive he can get the best out of the former Arsenal, Manchester City and Real Madrid striker and says he would not stand in his way if a "very, very big" club came calling.

"We're going to be in a difficult position if he does terrific, in a way," he said.

"We'll have to face that problem at the end of the year. The future is very much open for Ade. It's a big opportunity for him, not only for us.

"You look at his age and it's hard to believe he is only 31. He seems to have been around for years. He really should be in his prime at this time. I think he can go on.

"He can play for another very, very big club. If we can get him up to speed and that was the case I'd certainly shake his hand and wish him very well."

Adebayor joins a side who have lost four consecutive Premier League matches, a run that has seen Pardew's men drop to 11th.