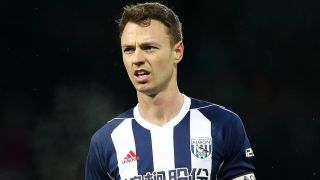 Alan Pardew has conceded Jonny Evans could be sold in the new year in order for West Brom to address their poor goalscoring record.

Evans has been linked with Premier League rivals Manchester City and Arsenal - the former seeing a bid rejected earlier this season.

With the January transfer window set to open on Monday, speculation has resurfaced that the runaway leaders could come back in for the Northern Ireland international.

In a week that saw Liverpool spend a reported £75million on Southampton's Virgil van Dijk, Pardew believes his player is on a par with the Dutchman and admits he may have to cash in on the defender as the Baggies look to improve on a run of no wins and just two goals in six matches under their new head coach.

"We are pretty tight financially. I am conscious if there are no funds available I might have to move something around," Pardew said.

"I have to get goals on the board otherwise you can't win games. So there is a scenario Jonny Evans might move and for sure I have looked at that.

"He has all the qualities for a top team. I would be stupid to sit here and deny that.

"There have been astonishing figures for defenders all through the summer really.

"If you look at defenders and compare Jonny with central defenders in the Premier League he is right up there."