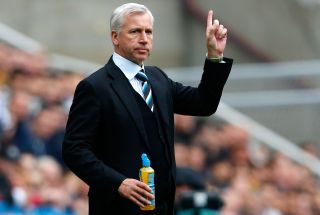 Yohan Cabaye gave the hosts the lead at St James' Park with a long-range drive, before Steven Gerrard levelled with a penalty after Mapou Yanga-Mbiwa had been sent off for fouling Luis Suarez before the break.

Even with 10 men, Newcastle managed to go in front again through Paul Dummett, but were unable to hang on as Daniel Sturridge secured a point for the visitors in the 72nd minute.

Pardew rued the sending off and felt his side could have taken all three points had they kept their full complement on the pitch throughout the full game.

"I was slightly disappointed that we didn’t see us with 11 men for the 90 minutes," he said. "I think we just about deserved a point.

"Liverpool are a great side and we matched them, we got the goal and that bode really well for an interesting game.

"Mapou thought he (Suarez) was offside and unfortunately we get a guy sent off.

"We then have to show another side, a resilience and character - and that got questioned about us last year - but we showed that is in the group and I'm immensely proud of the whole day."

The Newcastle boss singled out Dummett for praise after his first goal for the club and general performance after coming on following Yanga-Mbiwa's red card.

"I enjoyed Dummett's goal," he added. "The standard is incredibly high so the (young) guys who are playing are at a higher standard than they’ve ever been.

"Paul's had to come through a lot of players, so it's great for academy, and for us he got that goal."