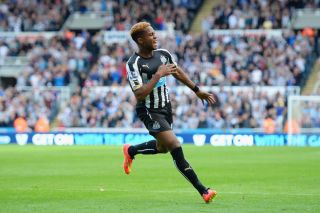 Having made his first-team debut as a substitute at Manchester City on the opening weekend of the season, Aarons was handed another chance to impress by Pardew in Saturday's clash with Crystal Palace.

The 18-year-old made a huge impact after replacing Yoan Gouffran in the 67th minute against Palace, scoring his maiden Premier League goal and also playing a significant role in Mike Williamson's subsequent strike that put Newcastle 3-2 up heading into injury time.

Palace hit back through Wilfried Zaha to claim a 3-3 draw, but Pardew could at least take heart from the performance of Aarons.

"There is just something about him. I've given a lot of really good players their debut, Jonjo Shelvey, Mark Noble and [Alex Oxlade-] Chamberlain spring to mind, and I I would put him in that category, where he is right now.

"But those guys see it through and that's what he needs to do.

"He really has been a real bonus this pre-season and the start of this season."