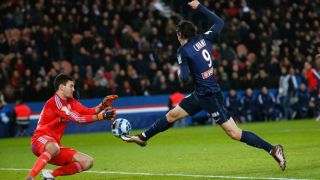 Lucas Moura's winning goal gave Paris Saint-Germain their third victory over Lyon this season as they ran out 2-1 winners at Parc des Princes in the quarter-finals of the Coupe de la Ligue.

Lucas was a second-half substitute for the French champions, and he scored within seven minutes of his introduction to clinch a place in the semi-finals.

Laurent Blanc's side took the lead when Adrien Rabiot profited from a scramble in the penalty area, poking the ball through a crowd of players after it appeared to have left the field of play.

Lyon hit back with a superb strike from Corentin Tolisso, but Lyon never quite looked capable of overcoming a side who dealt them a humiliating 5-1 defeat in Ligue 1 in December.

PSG remain on course for their third straight title in the competition – a feat only Marseille have achieved before them.

Both sides rested key players and, with the likes of Zlatan Ibrahimovic and Alexandre Lacazette looking on from the sidelines, there was a distinct lack of attacking threat in the early stages.

PSG went ahead in controversial circumstances when referee Benoit Bastien failed to spot the ball going out of play during a scramble in Lyon's penalty area, and Rabiot took full advantage of the chaos by stroking the ball past Mathieu Gorgelin to make it 1-0.

Lyon's Christophe Jallet, who crucially gave away possession shortly before PSG scored, surged forward and crossed superbly for Claudio Beauvue, but Salvatore Sirigu protected the hosts' lead with a fine save from point-blank range.

David Luiz could have doubled PSG's lead but he blazed a free header wide, before Benjamin Stambouli was allowed to stroll towards goal unchallenged only to fire a tame shot that Gorgelin saved easily.

PSG were punished for their wastefulness just before the break, when Jordan Ferri's chipped pass found Tolisso, who had the time to set himself and lash the ball into the top of the net, giving Sirigu no chance.

Lyon started confidently after the interval, and Jallet combined with Jeremy Morel to cause PSG problems on the right flank, while Edi Cavani was caught just offside at the other end when he broke through on goal with only Gorgelin to beat.

PSG ramped up their attacks as the visitors slowly began to tire and Layvin Kurzawa spurned a one-on-one with Gorgelin shortly before Stambouli lofted a shot over the bar from inside the box.

Laurent Blanc sent on Angel Di Maria, and the presence of the Argentine seemed to further energise the home side.

Cavani struck a superb shot from 20 yards that drew a brilliant diving save from Gorgelin, before Lyon went close when Arnold Mvuemba hit a swerving 30-yard drive that Sirigu had to punch out for a corner.

But PSG counter-attacked from the ensuing set piece, and Di Maria led a sweeping move that culminated in Lucas' cool finish, low into the net to seal the victory.