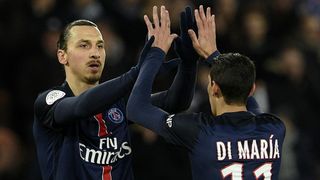 The reigning champions were without the injured Thiago Silva, Marquinhos, Javier Pastore and Marco Verratti, while Edinson Cavani was benched once more, but still they were utterly dominant as Laurent Blanc's side made it 31 top-flight matches unbeaten this season.

Ibrahimovic and Lucas found the net in the opening 45 minutes, before Van der Wiel effectively put the match early in the second half.

Pierrick Capelle pulled one back for the visitors, but it was nothing more than a consolation goal as Di Maria scored two within the space of five minutes to make it 5-1.

To highlight PSG's remarkable dominance of the division, they now sit 26 points clear of a fourth-placed Angers side who would have gone second had they won.

Blanc's men started the match in fine fashion and Ibrahimovic came close to opening the scoring after just two minutes following some good work from Lucas, but the Sweden international's chipped effort went wide of the target.

Van der Wiel should have broken the deadlock midway through first half after a clever through-ball from Di Maria, but the Netherlands international failed to beat Alexandre Letellier from close range.

PSG kept pushing and were eventually rewarded in the 32nd minute. Blaise Matuidi dispossessed Billy Ketkeophomphone inside his own half, found Ibrahimovic down the right and the powerful attacker beat Letellier with a low shot that took a slight deflection off Romain Thomas for his 17th goal in as many league games.

Angers got their first chance of the match shortly after the opening goal when Thomas beat his marker to the ball after a free-kick from the right, but Kevin Trapp did well to collect the defender's header.

Lucas doubled PSG's lead five minutes before half-time after yet another good run down the right from Van der Wiel, the full-back cutting the ball back for the Brazilian to convert from five yards.

Van der Wiel effectively put the match to bed in the 54th minute with a sublime finish after a superb team move involving Ibrahimovic, Di Maria and Matuidi. The latter eventually reached the Dutchman with a fine cross from the left and the right-back tapped home at the far post to make it 3-0.

The hosts pulled one back shortly after, though, when Capelle volleyed home from 20 yards after the PSG defence failed to adequately clear a corner.

There was no stopping PSG, however, as Di Maria quickly restored their three-goal lead. Lucas angled a pass back to the edge of the area and the former Real Madrid man beat the Angers goalkeeper with a stunning volley.

Di Maria piled even more misery on the visitors in the 66th minute. The winger outpaced his marker after a sublime pass from Matuidi and found the net with a subtle chip over Letellier as PSG recorded an easy win.