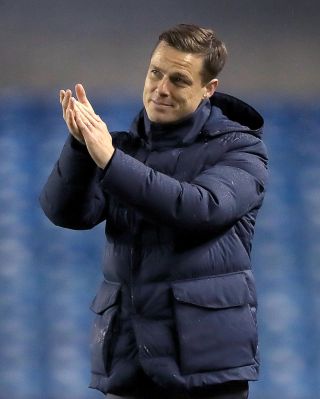 The Cottagers knew that they had to win to remain five points behind Leeds, who won the early kick-off at Hull 4-0, and although they did not produce one of their most fluent performances, they made the most of their luck.

Preston’s David Nugent headed them into the lead with a 58th-minute own goal, before Aboubakar Kamara sealed a 2-0 success over Preston with a breakaway goal at the end.

Parker said: “It is always important for us to win matches and we always go into every game expecting to win.

“This is where it comes down even more so to our mindset. My players looked tired but we have a bit of belief about ourselves.

“In the first 20 minutes we had to weather a bit of storm. Preston had a day extra to recover and they put pressure on us.

“As the half went on I felt we were growing into the game but I always thought one goal would decide it. We managed to get that and afterwards I always felt we were in the ascendancy.”

On the packed Championship schedule he added: “It is tough. Joe Bryan has damaged his hamstring after six minutes and that is overuse.

“But I was pleased by our dogged display today. It was two teams going toe-to-toe.”

Fulham now face Bristol City and neighbours Brentford before visiting Elland Road for a chance to narrow the gap on Leeds.

Parker said: “Of course, West Brom and Leeds have been the most consistent and they are two very good teams.

“We have them both to play but we have to concentrate first on Bristol City next week and the games that follow that and see what we can do.”

Preston manager Alex Neil was frustrated his side had played well for no reward and was annoyed referee David Webb did not show a red card to Fulham’s Anthony Knockaert after the on-loan winger seemed to flick a hand into the face of Darnell Fisher.

Neil said: “If you hit someone in the face, whether it’s a flick of your hand or a punch, you’ve lifted your hand and as far as I was concerned I don’t think there was any question that it was a red card.

“The fourth official said to us ‘well, he’s a lenient referee.’ I said: ‘well that’s really good, thanks very much for that.’

“If there’s a mistimed tackle I understand giving a bit of leniency to attacking players because they don’t tackle so much. But hitting someone in the face, regardless of who it is, is unacceptable.”

He also bemoaned his team’s ill-luck in the match, adding: “In the first half we had a goal disallowed and three really good opportunities to score.

“We started brightly in the second half but they got the set play and I don’t know how it happens but it ends up hitting off Nugent’s head and ending up in the back of the net.

“At a difficult venue the first goal is really important. We got a corner at the death and sent everybody up but we not only under-hit the corner, we don’t cover quick enough. It ends up a 2-0 scoreline which certainly flatters Fulham.

“Until the first goal in my opinion we were the team that deserved to win it.”