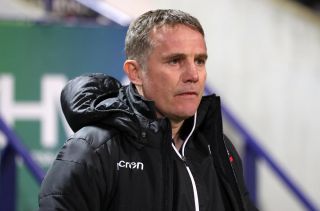 Phil Parkinson said he was ‘proud’ of Bolton’s performance, despite the 1-0 Sky Bet Championship loss at Nottingham Forest.

Wanderers head into an uncertain future in League One and boss Parkinson admitted he has not experienced anything like the events at the crisis-hit club during his 35 years in football.

However, he was pleased with the manner in which they signed off a season of disappointment with a battling display at the City Ground – which saw them beaten by Joe Lolley’s first half strike.

Bolton’s future is expected to be decided in the next few days, with the club expected to go into administration on Tuesday, as a takeover wrangle between current owner Ken Anderson and would-be buyer Laurence Bassini drags on.

Parkinson said: “I think everyone is looking forward to this being resolved, so that we can all move forward.

“I am very proud of the lads’ performance today. As everyone knows, we have had some very testing circumstances throughout the whole season but, in particular, over the last few months.

“And to come here and represent the club in the way that they have done – I was very proud of the performance.”

Bolton’s players had been on strike last week, after wages had again been paid late – and Parkinson admitted that picking a team had been a difficult process.

He said: “It was tough to pick a team – we basically had the lads we selected there, in the 18.

“We had injuries and a couple of players put their notice in, while a few players who are out of contract this summer have offers elsewhere and did not want to put themselves at risk.

“It has been a difficult week, in terms of team selection. But I am very proud of the lads who did play.

“But the staff have stuck together and conducted themselves in a professional way every day.”

Forest boss Martin O’Neill will work to improve on Forest’s ninth-placed finish next season and admits there is much work to do to achieve that.

He said: “We have a lot of work to do. We have improved from last season, which is good news.

“We will look forward to next season, however. We are remarkably upbeat.

“If I was taking the assessment following my 19 games in charge, I would have thought it was roughly where we probably should be, in the table.

“But now we have finished the season with three consecutive wins.”

O’Neill admitted he had sympathy for Bolton – but also felt that impacted on their performance.

“I think the players and perhaps the supporters got caught up with Bolton’s situation, as much as anything else. It was one of those afternoons,” he said.

“But winning the game and getting a third consecutive victory, was important. Overall, we know we can play a lot better, however.

“Once we got the goal, I was hoping we would get the second. It would have been nice to have won more convincingly. But I felt we were in command of the game, without being explosive.

“Overall we defended pretty stoutly in these three games.”