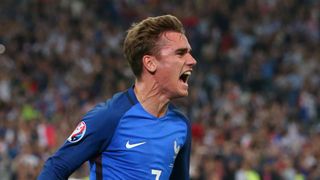 Former Arsenal midfielder Ray Parlour wants the Gunners to bring in a high-profile attacker ahead of the 2016-17 campaign and believes Atletico Madrid star Antoine Griezmann would be the perfect candidate.

Griezmann has been in stunning form at Euro 2016, scoring six goals in as many appearances to lead France to the final, with Portugal awaiting on Sunday.

The 25-year-old recently signed a new contract with Atletico until June 2021 and seems unlikely to be available for a transfer, but that has not stopped Parlour from dreaming.

"That's the sort of quality they need. With Alexis Sanchez and Mesut Ozil around they will always create chances. It's not rocket science in terms of who they need. A striker needs to come in.

"Olivier Giroud has done well. He's a good player but they need someone of the calibre of a Sergio Aguero or a Luis Suarez.

"They missed out on Suarez a few years ago. He would have been perfect for them and could have helped them go on to win the league.

"If they can get someone of that ilk then they could go on to challenge for the title next season."