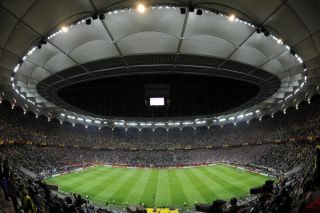 The Group F clash in Bucharest - which took place on October 11 and finished 1-1 - featured 11 yellow cards, and proved equally as confrontational off the field.

Police sprayed tear gas into the National Stadium stands as fireworks and flares were let off by both sets of supporters, and Hungary fans set light to several seats after Adam Szalai's first-half goal was disallowed.

The travelling Hungarian followers have also been punished for "racist behaviour".

UEFA announced on Friday that its Control, Ethics and Disciplinary body has decided that both countries should play their next home matches in partially closed grounds, while also fining the Romanian Football Federation €32,000 and its Hungarian counterpart €30,000.

A statement from European football's governing body revealed that Romania had been penalised for the "setting off/throwing of fireworks and missiles, use of a laser pointer [and] crowd disturbance".

Therefore, sector 122 of the National Stadium will be closed for their home qualifier against Northern Ireland next month. Travelling fans will not be affected, however.

Hungary, meanwhile, have been sanctioned for "racist behaviour, setting off/throwing fireworks and missiles [and] crowd disturbances".

As such, a minimum of 2,500 seats at the Florian Albert Stadion will be closed off for their qualifier against Finland on November 14.

Hungary have also been ordered to pay for the damage to Bucharest's National Stadium caused by their fans within 30 days.

Both sets of UEFA sanctions are open to appeal.