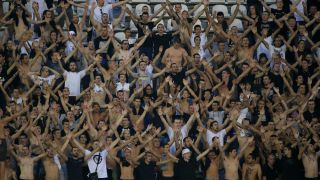 Partizan Belgrade have had their three-year suspension from UEFA competitions lifted after taking their case to the Court of Arbitration for Sport.

European football's governing body suspended the Serbian club after the adjudicatory chamber of its Club Financial Control Body (CFCB) ruled they had contravened regulations relating to unpaid debuts for the third time in the past five years.

UEFA stated Partizan's debuts stood at just under €2.5million, as of September 30 last year – the majority of which was owed to social and tax authorities.

However, Partizan presented new evidence during the CAS hearing that showed they had cleared their tax bill.

"The parties have agreed that the exclusion imposed by the CFCB shall be deemed to have been made conditional on the club's timely payment of the other overdue payables identified as at 30 September 2016," a statement from CAS read.

"Taking into account the fact that FK Partizan has satisfied this condition, the club will be eligible to compete in future UEFA club competitions."

Partizan were eliminated from the second qualifying round of this season's Europa League by Polish team Zaglebie Lubin.