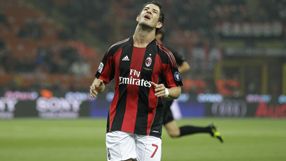 Clarence Seedorf is the only threat to Ronaldinho's return as playmaker.

Defenders Daniele Bonera and Gianluca Zambrotta are back in training after knocks but are not expected to play while Andrea Pirlo may return having been rested in Wednesday's 3-1 win over Palermo because he risked suspension for the derby.

Inter's injury woes are easing with goalkeeper Julio Cesar and midfielder Dejan Stankovic likely to return to the starting lineup but right-back Maicon is around two weeks from fitness.

Wesley Sneijder, who fainted with anaemia at half-time of last weekend's draw with Brescia, missed Wednesday's 1-1 draw at Lecce but should return on Sunday.

Walter Samuel is probably out for the season with a cruciate knee ligament injury so Ivan Cordoba will again deputise with Davide Santon standing in for Maicon.

Palermo president Maurizio Zamparini, whose side host Sicilian rivals Catania on Sunday, has threatened to sell the club for the umpteenth time but this time sounds more serious - and certainly more world-weary.

"I leave beaten by this pseudo-sporting world," he said in a statement after being angered by the refereeing in Wednesday's 3-1 loss at Milan.

Palermo striker Fabrizio Miccoli could return to the starting lineup on Sunday for the first time since suffering a knee injury in May but playmaker Javier Pastore is doubtful with a knock.

Juventus have trouble at right-back for Saturday's home game against AS Roma, given Marco Motta is suspended and will not face his former side,who are surging into form.

Fellow right-back Zdenek Grygera is still injured so winger Hasan Salihamidzic, dropped from the first-team squad after failing to find an August move, may be drafted in as a defender or else wide man Simone Pepe may drop back.