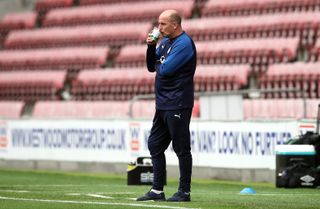 Paul Cook has resigned from his role as Wigan manager, the PA news agency understands.

The 53-year-old was unable to keep the Latics in the Sky Bet Championship after they were hit with a 12-point deduction for entering administration.

It saw Wigan drop from 13th to 23rd on the final day, but an appeal against the sanction will be heard on Friday.

Cook took over in May 2017 and led the DW Stadium side to the League One title during his first season before he secured Championship survival last year.

A points penalty made it too tall an order this time and he will now leave Wigan, where he also spent time as a player between 1984 and 1988.

The club were placed in administration on July 1, despite a change of ownership less than a month before.

A preferred bidder was announced on July 22, the same day the Latics were relegated, but negotiations broke down because of the preferred bidder’s “non-compliance in the first stage of exclusivity.”

Talks are under way with the next preferred bidder out of the five offers which were received and there was an update from the administrators on Monday.

It read: “The joint administrators would like to provide the following update to state that discussions with the preferred bidder have continued on a positive note over the weekend and today, though at this stage there is no exclusive agreement.

“The joint administrators will further update supporters on Saturday following the appeal hearing on Friday, which is expected to take all day.”

The club announced on Wednesday afternoon that striker Callum Lang had joined Motherwell on a season-long loan, subject to clearance from the English Football League and the Football Association.