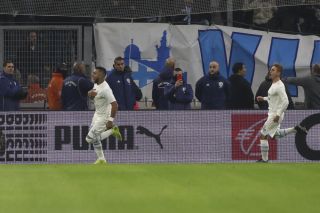 Dimitri Payet inspired 10-man Marseille to a 2-1 victory in the Choc des Olympiques against Lyon at the Stade Velodrome.

The midfielder’s first-half brace proved enough for Les Phoceens despite playing the last 26 minutes with 10 men after centre-back Alvaro Gonzalez was sent off.

Moussa Dembele had pulled one back for Lyon five minutes before Gonzalez’s dismissal but Marseille held onto the three points which lifted them up to second in Ligue 1.

A frantic start saw both teams have early chances with Marseille striker Dario Benedetto heading over inside the first minute before Maxwel Cornet fired straight at Steve Mandanda at the other end.

However, the home side had a golden chance to take the lead, but not without a lengthy delay before Payet stepped up to take a penalty after Thiago Mendes handled in the area.

Benedetto appeared to slap Lyon full-back Leo Dubois on the head, which saw the defender collapse to the floor and cause a melee between the two sets of players, as Payet began his run-up.

No action was taken by referee Antony Gautier before the France international saw his second attempt to take the spot-kick halted for a VAR check, which proved fruitless, before the former West Ham man curled his eventual penalty into the top corner.

Payet went close with a powerful effort but shot straight at Anthony Lopes, while Dembele headed just wide of the right post for Lyon.

Payet doubled his tally and Marseille’s lead six minutes before half-time when he rounded off a fine counter-attack, in which he was involved three times, with a low finish into the bottom left corner from the edge of the penalty area.

Lyon improved after the restart with Bertrand Traore forcing Mandanda into a save from a free-kick before thick fog swept into the stadium and stopped play for five minutes.

It did not stop Lyon’s momentum, though, as Dembele headed home Traore’s enticing cross in the 59th minute – after Gonzalez had inexplicably ducked underneath the ball – for his ninth league goal of the campaign.

Gonzalez’s night went from bad to worse when he was shown a straight red card for bundling over Dembele as the final defender, with Cornet’s resulting free-kick deflecting narrowly wide.

The visitors struggled to break down the Marseille defence, despite their numerical advantage, with Martin Terrier flashing an effort just wide late on as Lyon saw their three-match unbeaten league run come to an end.