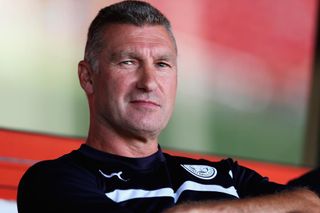 Pearson opted to largely keep faith in the players that secured the Championship title last season and was rewarded with a gutsy display at the King Power Stadium on Saturday, capped off by substitute Chris Wood's late equaliser.

Having gone behind to Aiden McGeady's stunning strike in the 20th minute, Leicester hit back straight away as record signing Leonardo Ulloa restored parity on his competitive debut for the club.

Everton looked to have sealed the points when Steven Naismith restored their lead before half-time, but Wood came off the bench to earn a share of the spoils in the 86th minute, leaving Pearson proud that his side never gave up hope.

"It's nice to get something out of the game," said Pearson.

"It would have been easy to think things weren't going our way but I'm very pleased with how we responded, both to the first goal within 90 seconds and in the second half we looked pretty dangerous.

"I'm disappointed that we've been unable to win the game but I think when you put the game into context, we went behind twice and from my perspective there was an element of fortune about both of those but I'm not doubting the quality of the finishes.

"I thought we defended set-plays pretty well in most part.

"We'll need to improve in certain areas but I think the biggest message is that the players have learnt that, even during a game with setbacks, we are capable of adapting during a game and getting something out of a game against an exceptionally good side."

The challenge gets no easier for Leicester as they face Chelsea and Arsenal in their next two Premier League games.