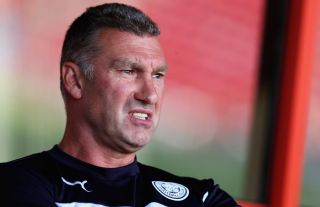 Following his side's 2-0 Premier League defeat to Chelsea on Saturday, Pearson explained he was looking to strengthen his options ahead of the transfer window closing on September 1.

Having admitted the club's interest in Cambiasso - currently a free agent after leaving Inter - last week, Pearson explained complexities in the deal were beginning to become an issue.

"It's proved exceptionally hard to find a solution to the negotiations," he said.

"There seems to be so many representatives for players, it's finding out who's actually doing the deal and that's been the biggest problem for us."

Pearson also took time to comment on the future of Chris Wood, who had previously been linked with a move to Wolves but came off the bench to grab a late equaliser in Leicester's 2-2 draw with Everton on the opening day.

"I never said he was leaving," Pearson commented. "I'm not accountable for the speculation.

"There was interest [from Wolves] and discussion between the sides but my discussion with the player was very simple.

"He wants to stay and I'm happy for him to stay so it's very straightforward."