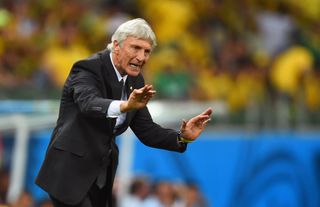 Colombia played for the first time since losing 2-1 to Brazil in the World Cup quarter-finals at the Sun Life Stadium in Miami, and were undone by Neymar's goal seven minutes from time.

Pekerman's side were hindered from the 49th minute when Fiorentina forward Cuadrado was dismissed for a second bookable offence after fouling Neymar.

The 65-year-old believes Cuadrado's sending off was unjust, and swung the match decisively in Brazil's favour.

"I believe that Cuadrado's red card damaged our chances and it showed. I think it wasn't a foul worthy of a sending off," said Pekerman.

"We were looking for the equaliser, and our play was conditioned by that. In the end Brazil deserved to win."

Reflecting on the match as a whole, Pekerman - who signed a new four-year deal last month - admitted Colombia did not play to their full potential.

"We would have wanted to play a bit better," he continued.

"We were under the level we used to have before, and we knew that at this moment in the calendar we are not in our best moment, but anyway the game was very competitive."