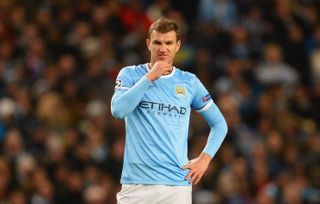 The Bosnia-Herzegovina international has been limited to just seven starts in the Premier League this season, largely due to the form of fellow forwards Sergio Aguero and Alvaro Negredo.

Dzeko gave a timely reminder of his importance to the squad by scoring the winner in a battling 1-0 victory over Crystal Palace on Saturday and, with Aguero currently sidelined with a calf injury, he looks set to get further opportunities.

With the 27-year-old set to feature for his country at the FIFA World Cup rumours have circulated that Dzeko could depart in search of regular first-team football.

But Pellegrini insists it is a situation that he has never given any serious consideration to.

"There was never any chance of Dzeko going in January," said Pellegrini. "He is a very important player for the team.

"If you look at the last month I think Dzeko was one of the players that played the most minutes in December.

"He has continued to be a very important player for us. He (is) always a player wants to play every game but it is impossible with the amount of games that we have to play.

"I think he is happy here. He is an important striker and could have a lot of offers from other clubs but there is never a chance of him leaving."

With the transfer window set to reopen on Wednesday, Pellegrini confirmed that he would consider whether he would need to make any additions to his squad, but insisted that for now there are no developments on player arrivals.

He added: "For the moment, we are not talking about that but we are always analysing what we need and what we don't need.

"The possibility of the transfer window is there for every club. We will see what we are going to do in the next days."