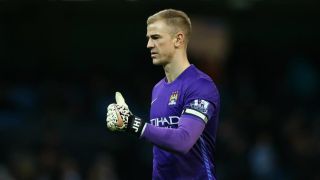 Joe Hart will miss out on another League Cup final should Manchester City overcome a 2-1 first-leg deficit against Everton in midweek.

City's reserve Willy Caballero has started every game in the competition this season and manager Manuel Pellegrini hinted the Argentine goalkeeper will maintain his place in the team even when a trophy is on offer.

England number one Hart was absent from the 2014 League Cup final and Pellegrini appears unwilling to switch tact.

"We won it two years ago and Costel Pantilimon played all the games and this season we will do exactly the same with Willy continuing in goal," he said after City's 2-2 Premier League draw at West Ham.

"We have absolute faith in Willy. He worked with me at Malaga and was there for three years before he arrived here at Manchester City. He's a very good goalkeeper and he has played very well in all the League Cup games.

"We will try to beat Everton and then we will see at the end of February, but you have an example of what happened in my first season here with Pantilimon.”

The Chilean boss added: "I think it is important to win every competition. That is my mentality. You need an ambitious mind. If you win the League Cup then it is a good achievement for the season.

"But I don't think it will relieve pressure on trying to win the Premier League."