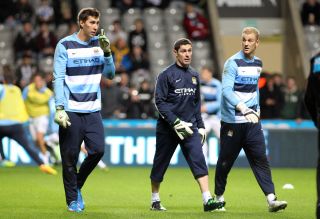 The England goalkeeper had come in for criticism following a string of mistakes for both club and country this season.

Hart fumbled a James Morrison into the net when England welcomed Scotland to Wembley in August and has since been judged at fault for goals in club games against Cardiff City, Aston Villa and Bayern Munich since.

He once again made headlines for the wrong reasons at the weekend, charging off his line and failing to deal with a long ball, allowing Fernando Torres a tap-in to seal a 2-1 defeat for City at Chelsea.

Second-choice keeper Costel Pantilimon started City's League Cup win at Newcastle on Wednesday night and Pellegrini has not ruled out giving the Romanian an opportunity in the Premier League.

The City boss said: "He is a very good goalkeeper and he normally plays in the Capital One Cup and the FA Cup,

"I think that we will talk tomorrow (Thursday, about team selection). One goalkeeper can play but the other will have our full support. We will think about it."

City have ground to make up in the Premier League after slipping down to seventh place, six points behind leaders Arsenal.