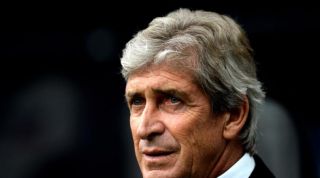 Defending champions City go into Saturday's clash at Aston Villa somewhat off the pace, having won only half of their six top-flight fixtures this season.

Chelsea, meanwhile, have made a flying start to their league campaign, only dropping points once following a 1-1 draw against City at the Etihad Stadium.

However, Pellegrini is not reading too much into the state of the Premier League table just yet and feels repeats of the positive performance in the 4-2 win at Hull City last weekend will stand City in good stead.

"We are just starting in the league and it is not good to be five points behind Chelsea," he explained on Friday.

"But at the moment we have one more point than this time last year, when Arsenal were six points ahead of us.

"The important thing is to continue playing in the way we did against Hull."

Yaya Toure is one City player to come in for criticism so far this term, while there have been questions asked surrounding Sergio Aguero's fitness.

However, the Chilean is not concerned by the duo's form, explaining: "When we play well the most important players on the team play well, and when we play badly the whole team badly.

"I don't think this team depends on one player.

"I think Sergio is 100 per cent, maybe the same as Yaya. I don't think you should criticise one player. Sergio has scored five goals at the moment, we know he is such a good player so he can score 10 goals.

"I don't think he is in a bad moment or not 100 per cent. I am sure he will continue to show that this week."