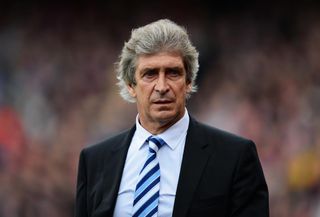 The 2011-12 champions on Sunday re-assumed control of their own destiny in the chase for the trophy by capitalising on Liverpool's earlier defeat to Chelsea with a 2-0 win.

Third-placed City are now just three points behind Brendan Rodgers' side with a game in hand over the Merseyside club and also have a better goal difference, while Chelsea are just a point better off than the Etihad Stadium outfit and have also played a game more.

First-half strikes from Edin Dzeko and Yaya Toure were enough to seal the points and Pellegrini was delighted with the day's developments.

"It was a happy day and it was very important for us," he is quoted as saying by BBC Sport. "Before today we were depending on other teams.

"Now we continue as we were two weeks ago, depending only on what we do.

"It was important to get a good start but also not to let Crystal Palace score.

"It was a very professional performance, but it's not finished. We have to play three games more.

"We will see in the future who will be the best."

And the Chilean revealed the squad had discussed earlier events at Anfield prior to kick-off.

He added: "Of course we talked with the players (about the Liverpool result) before the game, but we could not play against Palace depending on Liverpool," he added. "We still had to win so we were very concentrated on our own game."