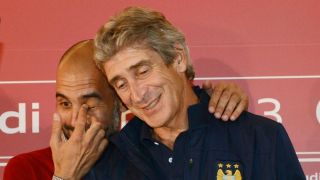 Manuel Pellegrini does not believe Pep Guardiola has any reason to say sorry for being linked with his job at Manchester City.

Speculation has increased that Guardiola will succeed Pellegrini at the Etihad Stadium next term after his announcement last month that he will leave Bayern Munich at the end of his contract in June.

The former Barcelona boss subsequently said his ambition to work in the Premier League lay behind his decision to leave the Bundesliga champions and this week Guardiola apologised to top-flight bosses in England, having also been mentioned in connection with Manchester United and Chelsea.

Pellegrini, who was dismissed in 2010 by Real Madrid after finishing as runners-up in La Liga to Guardiola's Barca despite claiming a then club-record tally of 96 points, is unconcerned over his future and focused on securing major honours for City this season.

He told a media conference ahead of Wednesday's Premier League match against Everton: "No, I'm not worried about that. I don't think that apology is for me. I don't have anything to say about that.

"It's the same thing that I said three, four weeks ago – I am not worried about the future.

"I repeat that my duty is to try and make the best work here at Manchester City. My target is to try and win the Premier League this year, be involved in every competition until the end and try to win a competition more.

"If I finish the year with those achievements I will be very happy and in that moment I just will start thinking about the future."

Irrespective of whether the January transfer window is Pellegrini's final one backed by City's considerable financial might, he does not expect there to be any significant business as he team battles for honours on four fronts.

The 62-year-old rejected reports that striker Wilfried Bony could return to Swansea City after a year in Manchester and added that the development of teenage striker Kelechi Iheanacho, who scored his fifth goal of the season during Saturday's 3-0 FA Cup win at Norwich City, meant he had no need to seek forward reinforcements.

"As you say, it is speculation – nothing more," he added, with regards to Bony. "I don't talk about rumours.

"I think that our squad is complete. Nobody will come and nobody will go out.

"I repeat we have options [to change this position] until the last day [of the transfer window] but for now, no news.

"The answer also for the questions you asked before about whether we are going to bring in another striker – the other striker is Kelechi."