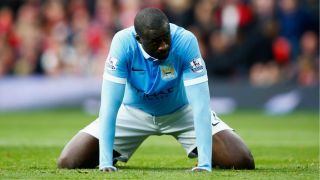 Manuel Pellegrini insists Manchester City midfielder Yaya Toure is fully focused on the current campaign and not planning his future away from the club.

Toure’s adviser Dimitri Seluk previously suggested the Ivorian was willing to listen to offers from other clubs when the season finishes.

Chinese Super League side Shanghai SIPG and Serie A outfit Inter Milan have both vocalised their interest in taking on the 32-year-old in recent times.

However, Pellegrini dismissed speculation Toure was distracted from his current task.

"I know what Yaya thinks, I know Yaya is mentally absolutely involved in this season," the Chilean said.

When pushed on Toure releasing similar remarks in the past, Pellegrini responded by adding: "What happened? Nothing. He gave his opinion last season and nothing more."

Toure, who joined City from Barcelona in a £24million deal in 2010, was left out of the starting line-up for the 4-0 win over Crystal Palace at the weekend.

But Pellegrini is adamant the player remains a vital member of the squad.

"Yaya will be always a very important player for our team. Maybe as we are just talking about the amount of games that we have to play, it was one of the reasons he didn't start the last game but he always makes a difference," he said.

"We also have very important other midfielders in Fernando, Fernandinho and Delph, so the four of them cover that position in a good way.

"I think they are four players that for me give me a lot of trust but Yaya will continue being always a very important player."