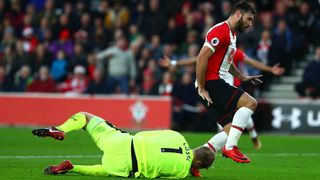 Austin gave Southampton the lead in a 1-1 draw with Huddersfield on Saturday, his goal subsequently cancelled out by Laurent Depoitre.

It is now five goals in seven appearances for Austin, but he could face retrospective action after appearing to kick Lossl in the face as the Dane gathered a throughball.

Lossl was bloodied by the incident yet Pellegrino does not believe there was any malice in Austin's actions, and also revealed Southampton could lose the forward to injury.

He told BBC Sport: "Charlie Austin has a hamstring injury and we will analyse in the next few days. It is not good for the player and we lose our top-scorer and an important player.

"I did not see the action [with Lossl], but Charlie does not have the intention to do this.

Today we took another step in the right direction - we showed character, fought and now we are sitting with a well deserved point cheers and December 23, 2017

"The game was a little bit flat because both teams were trying to press and the ball was more in the air and there were challenges going in.

"It was a tight game and there were opportunities for both teams, but it was a pity we were close to a second goal and to concede a goal was really painful."

Offering a starkly different assessment to his managerial counterpart, Wagner said: "It looks very ugly from my point of view. I was a striker and I know Jonas was on the ball so early what you have to do is not touch him.

"It looked nasty and ugly, it is something that should not happen, I am unsure what will happen now.

"I will never say someone likes to hurt an opponent on purpose but to be honest it looks like this is the case. It should never happen."