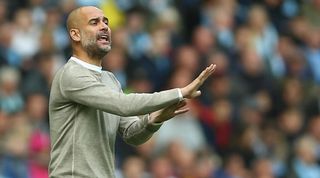 Rio Ferdinand has hailed Manchester City boss Pep Guardiola as a “genius” who has “changed the way we see football”.

Guardiola is widely regarded as one of the greatest managers of the modern era, having won eight top-flight titles and two Champions Leagues at Barcelona, Bayern Munich and City since taking charge of the former in 2008.

The Catalan has also produced some of the most entertaining teams in history, with a focus on attacking play and tactical innovation.

However, one of the few remaining criticisms of Guardiola centres on the fact that he has not won the Champions League since leaving the Camp Nou in 2012.

The former midfielder suffered three consecutive semi-final eliminations at Bayern and has not even reached the last four as City boss.

But Ferdinand believes Guardiola has already achieved so much during his 11 years in the dugout.

“Yeah I’m sure,” the former Manchester United defender told BT Sport when it was put to him that Guardiola, whose City side thrashed Atalanta 5-1 in the Champions League on Tuesday, will be desperate to be crowned a European champion for the third time in his coaching career.

“He’s got that competitive edge. But that’s a genius sitting there. He’s somebody who’s an innovator. He’s changed the way we see football.

“We talk about goalkeepers coming out and being a part of the team, and not being detached and just being a goalkeeper. They’re now part of the back four and they’re involved – and that’s down to him.

“Full-backs are playing inside the field now more than ever. It’s crazy, some of the stuff he does. Sometimes you sit and think, ‘is it boredom? Is he bored of just winning the way he was and wanted to do something different?’”

Manchester City moved to within six points of Premier League leaders Liverpool at the weekend and are now preparing to take on Aston Villa on Saturday.