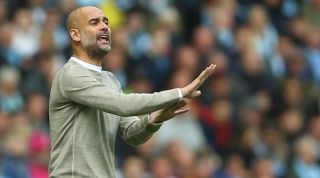 Pep Guardiola has admitted that he would not win as many trophies if he was not at a club like Manchester City.

Guardiola is widely regarded as one of the world's leading coaches, having claimed silverware at each of his three clubs.

He then lifted three Bundesliga titles and DFB-Pokals at Bayern Munich, before his move to the Etihad Stadium in 2016.

Guardiola has since guided Manchester City to two Premier League titles, two League Cups and an FA Cup, but despite his extraordinary success in recent years, he does not think of himself as the best manager on the planet.

"I was," he told Sky Sports when it was put to him that he was the best coach in the world.

“What is the best coach in the world? I never felt I am the best, never in my life.

“When I won six titles in a row in Barcelona and won trebles, I never felt that. I won because I had extraordinary players at big clubs.

“Give me a team that is not like Manchester City, I am not going to win.”

Guardiola has little chance of winning a third consecutive Premier League title this season, with Liverpool 22 points clear at the top.

The City boss praised Jurgen Klopp for the work he has done at Anfield, although he also pointed out that the Reds' success has been a long time in the making.

“It was a process. New players, investment, more and more, and after they got them they are the best team in the world right now.

“Sometimes people believe if you are Pep, Jurgen, or you are another [big] name, you have to win all titles every season with 2000 million points and 2000 million goals.

“Sometimes it’s not possible, sometimes because of the opposition, sometimes you cannot do it. Not all the time in any sport has a team won everything every season all of the time.”

City will now turn their attention to other competitions, with Real Madrid drawn as their opponents in the last 16 of the Champions League.

“We work harder than last season when we won all the domestic trophies in this country.

"I want to win the Champions League. I dream and will enjoy preparing games games against Madrid, to see what we can do.

“This process, these two weeks, are the happiest moments of my profession - looking at what we can do to beat them.”