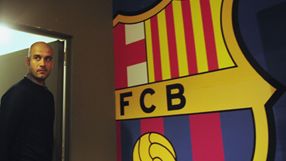 The spectacularly successful 41-year-old, who announced on Friday he was quitting at the end of the season, led Barca to a club-record 13 trophies in his four seasons in charge including two Champions League crowns and three straight La Liga titles.

He took over from Dutchman Frank Rijkaard in 2008 with the team in disarray after a second-straight trophyless campaign, ditching high-profile players including an underperforming Ronaldinho and making some astute signings that helped set Barca on their way to an unprecedented haul of silverware.

Imbued from an early age with Barca's unique brand of football based on relentless possession and rapid passing, he has taken it to new heights and won plaudits from such heavyweights of the game as Manchester United manager Sir Alex Ferguson and Arsenal's Arsene Wenger.

However, his attritional battle with combative Real Madrid coach Jose Mourinho, who was an assistant coach at Barca when Guardiola was a player, appeared to take away some of the joy he felt for his work and may have contributed to his decision to quit and take a rest.

His sudden departure after months of speculation is a fresh blow for a club still reeling from Tuesday's Champions League last-four elimination at the hands of Chelsea. They are also poised to lose their La Liga title to Real.

However, the board's decision to promote his long-term assistant and close friend Tito Vilanova to replace him suggests his legacy will be in safe hands.

"The only thing that I can be accused of is that I love my work," an emotional Guardiola told legislators in the Catalan parliament after being presented with a gold medal, the institution's highest honour, in September last year.

"What has educated me is the microsystem that is a football team," he added. "I am who I am for having played sport."

Softly-spoken, unfailingly magnanimous in victory and defeat, keen on poetry and philosophy and a snappy dresser, Guardiola has earned the admiration and respect of an overwhelming majority in the often cut-throat world of football in Spain and beyond.

Born in the Catalan town of Santpedor on January 18, 1971, Josep Guardiola i Sala joined Barca's famed 'La Masia' youth academy in his early teens before making his first-team debut under Dutch coach Johan Cruyff in 1990.

With superb ball-winning and playing ability, he ran the midfield throughout the next decade, helping Barca to their first European Cup triumph in 1992 as well as six La Liga titles, two King's Cups and a European Cup Winners' Cup.

After spells at clubs in Italy, Qatar and Mexico, he retired in late 2006.

His stint with Brescia in Serie A was disrupted when he tested positive for nandrolone after a league match and was banned for four months. He protested his innocence and eventually cleared his name through the courts in 2009.

Appointed coach of Barca B - the club's reserve team - in 2007, he steered them to the top of their group and promotion from Spai