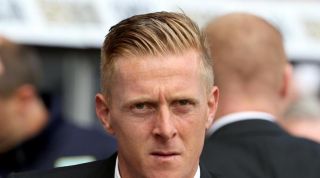 The Welsh club turned in an impressive display to follow up wins over Manchester United and Burnley with another three Premier League points over Alan Irvine's men.

But Monk insists these are still early days and that Swansea must be prepared for the long road ahead.

"It's a good start, but that's all it is, a start for us," he said. "We obviously understand there's a long way to go and a lot more work to do, but in terms of today and the start that we've had, we're pretty much where we should be.

"It's good to have that winning habit. But I guess when you try and be a perfectionist you see more of the things they do wrong than they do right.

"But today we did many things right.

"It was important that we started the game well, which I thought we did, and ultimately got the right result."

Nathan Dyer bookended Swansea's performance with the first and third goals, but it was Wayne Routledge's second that stole the show at the Liberty Stadium.

The winger shaped his body perfectly to get over the ball and fire an improvised half-volley beyond West Brom goalkeeper Ben Foster from the edge of the box in the 24th minute.

"I was half-shouting for him to bring it down, and then when he hit it and I saw it going in I thought: 'Make sure you hit it'," he continued. "We've got some very good technicians at the club - very good techniques from a lot of the players.

"It's something that the guys work on in training and we try and promote.

"Obviously it was a very good finish in the end from Wayne.

"I'm delighted for him. He's worked very hard and he's been, in my time since I started, one of the most consistent players that I've had.

"His consistency's so high now at such a top level and it's great to see."

Monk also bemoaned the arrival of the international break, adding: "When you've got momentum with you and you've got a two-week break, you kind of wish it wasn't."