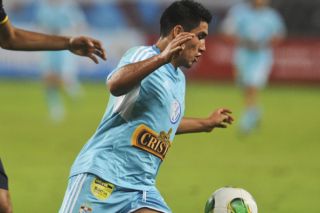 The win ended Cristal's two-game run without victory and ensured the capital club remain top of Group A in the Peru Primera Division.

Second-placed Real Garcilaso drew 2-2 with Cesar Vallejo to rise to 65 points in Group A and Cristal would have dropped from top spot if they had failed to overcome Pacifico.

But Avila single-handedly lifted Cristal out of their form slump, scoring in the 23rd, 55th and 60th minutes, before Jose Carlos Fernandez and Junior Ross capped off the home side's big win in the final quarter of an hour.

In Group B, Universitario continued their dominant run, coming from behind to defeat UTC Cajamarca 2-1 in a top-of-the-table clash.

Universitario have lost just two games in their past 14 in the Primera Division and lead Group B by six points after their win over second-placed Cajamarca.

A penalty from Reimond Manco in the 33rd minute had put the visitors ahead at Universitario's Estadio Monumental but Manuel Ruidiaz equalised in the shadows of half-time before Miguel Ximenez put the hosts ahead just after the break.

In other Primera Division results, Jose Galvez defeated Cienciano 1-0 and Universidad San Martin drew 2-2 with Juan Aurich, while Sport Huancayo came from behind to draw 4-4 away to Melgar and Inti Gas were held to a 1-1 stalemate by Leon de Huanuco.