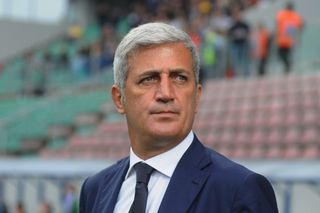 The Rome club travel to Apollon in the UEFA Europa League on Thursday following a disappointing run of form that has left them without a win since their 3-1 victory over Catania last month.

Lazio are ninth in Serie A as a result, but sit joint-top of Europa League Group J with Trabzonspor ahead of their trip to face the Cypriot side.

"I'm relaxed. It's only the results that are missing," he told Tuttosport.

"I feel good because I know what we are doing and how we are working. It's just a bad patch."

Petkovic remains confident that Lazio will turn their form around, while blaming the media for the recent speculation surrounding his role at the club.

"You (the media) created this mess," he added.

"You like this kind of thing because you sell a couple more newspapers but I'm not worried and I'm showing my team that.

"I'm putting out my strongest team against Apollon and we're going out there to show what we can do and overcome our recent difficulties.

"We need to show more determination and focus for the whole 90 minutes. But we have deserved better in our last few games."