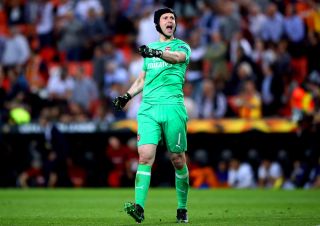 Petr Cech is renowned as a safe pair of hands for the last 15 years and now one of the greatest goalkeepers of the Premier League era has even managed to hold onto his dream retirement match.

The 36-year-old will don his gloves for the last time when Arsenal face his former club Chelsea in the Europa League final at Baku’s Olympic Stadium on May 29.

Cech announced his decision to retire on January 15, before European competitions had even restarted following their usual winter hiatus.

“That would be an ideal scenario for me to finish my career,” was Cech’s understated response when it was put to him ahead of Arsenal’s Europa League round of 32 tie with BATE Borisov that he could end his trophy-laden career with more silverware.

By this point, the former Sparta Prague and Rennes stopper was nominally reduced to Arsenal’s second-choice behind summer signing Bernd Leno, with the Europa League his only stage to play out the final months of a fine career.

His move to Arsenal surfaced under similar circumstances.

He won four Premier League titles, four FA Cups, three League Cups, the Champions League and the Europa League since arriving at Stamford Bridge in 2004 in a deal which pre-dated the arrival of Jose Mourinho as Chelsea boss that summer.

During that time, there could have been an altogether different ending to Cech’s playing days – something more of a nightmare than from the dream world.

The former Czech Republic international suffered a fractured skull during Chelsea’s Premier League game with Reading in 2006, an injury which could have cost Cech his life, let alone his career.

A mark of the man came when Hull midfielder Ryan Mason sustained a similar injury in 2017 – the former Tottenham man never able to play again.

“I can’t speak highly enough of Petr Cech. He’s set the standards of what it is to be a proper man and a gentleman,” Mason said after revealing he was in regular phone contact with Cech soon after the incident.

Time waits for no man and Thibaut Courtois was highly-regarded at Chelsea, prising the gloves from Cech for much of the 2014/15 season.

Cech did not feel he could sit around warming benches at his age and, in a move which showed the respect for his services and his character, Chelsea owner Roman Abramovich allowed him to move across London to the Emirates Stadium despite not wanting one of his original title winners to depart at all.

Three seasons as first-choice at Arsenal would follow as Cech added another FA Cup winners’ medal to his collection – even if he was an unused substitute in the victory over his former employers as Arsene Wenger opted to play David Ospina throughout the cup run.

During that time he also became the first goalkeeper to achieve 200 Premier League clean sheets and still holds the record (202) today.

Wenger then left in the summer of 2018 and, as part of the rebuilding job undertaken by incoming head coach Unai Emery and a new backroom team, Leno was acquired from Bayer Leverkusen.

Cech would still remain Emery’s number one until he was forced off with a hamstring injury in the win over Watford on September 29.

Leno came in and secured his place as Emery’s Premier League goalkeeper – but in becoming the Europa League stand-in Cech has earned a shot to bring down the curtain on a fine career with a final bow.

“It will be remarkable to end my career against Chelsea,” he said after helping Arsenal to a 4-2 semi-final victory against Valencia in Spain.

“The last dream was to play this European final and it has come true. Now the dream is to win the trophy.”