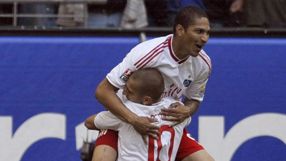 Hamburg SV's attacking partnership between Paolo Guerrero and Mladen Petric will be revived against Mainz on Saturday for the last time in front of a home crowd, coach Thorsten Fink said.

Peruvian striker Guerrero is back after an eight-match ban for a violent tackle and Petric, in his final home game for the Bundesliga club, is leaving at the end of the season.

"Mladen was protected for a bit and is now top fit," said Fink. "Guerrero has also trained very intensively during his absence and is in very good condition."

Hamburg, the only top team never to have played in the second division since the creation of the Bundesliga in 1963, will secure their top-flight status for another season with a win on Saturday.

Werder Bremen will not extend the contract of former Germany international Tim Borowski but said they were planning to continue working with him in some other capacity.

Borowski, who returned to Bremen in 2009 after a one-season stint at Bayern Munich, has not ruled out playing on despite missing the entire season with an ankle injury.

"It is just too much fun but I first have to see how my ankle will react," said Borowski, who will be 32 in May.

Austrian defender Andreas Ibertsberger will leave Hoffenheim at the end of the season after four-and-a-half years, the club said.

The 29-year-old, who joined Hoffenheim in January 2008 and won promotion to the top flight with the club, has played only one game this season due to a back injury.

Ninth-placed Hoffenheim host Nuremberg, who are 11th, on Saturday.

Bayer Leverkusen defender Michal Kadlec has been cleared to play with a face mask after being attacked last week outside a night club by two alleged Cologne fans who broke his nose.

Leverkusen, who are in sixth place and have all but secured their spot in the Europa League next season, take on fellow Europa League hopefuls Hannover 96 on Saturday.