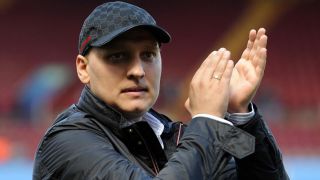 Former Aston Villa captain Stiliyan Petrov will not be offered a playing contract, but could remain with the club.

Petrov, 37, has been training with the Championship club, making his comeback after battling leukaemia following his diagnosis in 2012.

However, the former Bulgaria international midfielder is set to miss out on an on-field return, but manager Roberto Di Matteo wants him to stay.

"Stiliyan is an inspiration to all of us," Di Matteo said.

"I have spoken to him and explained my thoughts and offered him the chance to remain at the club.

"Stiliyan is going to discuss this with his family before coming back to us."

Petrov spent seven seasons at Villa before announcing his retirement in May 2013, having been diagnosed with leukaemia a year earlier.