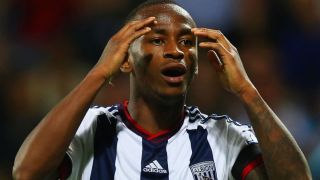 The Professional Footballers' Association (PFA) say West Brom and Saido Berahino will meet next week to discuss the striker's future.

Berahino was the subject of a number of bids from Tottenham during the transfer window, all of which were rejected, and had a transfer request turned down by Albion.

Frustration appeared to have got the better of the 22-year-old when he tweeted on Tuesday indicating that he would never play for West Brom chairman Jeremy Peace again.

Berahino - dropped by head coach Tony Pulis while speculation continued of a move to Spurs - has now been given extra time off by West Brom in order to clear his head.

And the PFA expects the club and the player to discuss the situation next week, adding they do not envisage any sort of strike on the player's behalf as had been suggested in Berahino's tweet.

"Everyone is jumping up and down but we don't think [a strike] will happen," a PFA spokesperson told Omnisport.

"We've spoken to the club, who have offered mediation and support, as well as someone close to the player.

"The club have given him a few days off, they will sit down with the player next week and I'm sure it'll get sorted out.

"He's got two years left on his contract so this will either be sorted in January or next season.

"In the meantime I'm sure he will just get on with it."