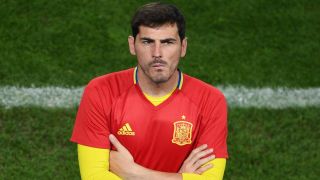 Spain stepped into a new era on Thursday with the appointment of Julen Lopetegui as head coach.

Back-to-back European champions and World Cup-winners between 2008 and 2012, La Roja enjoyed an era of international dominance unparalleled in modern times.

However, the legacy of Vicente del Bosque - who masterminded the triumphs in 2010 and 2012 - was somewhat tainted by an ignominious group-stage exit at the World Cup in 2014, before a defeat to Italy in the last 16 of Euro 2016 in June.

Now that his successor has been named, we look at five key issues to address if Spain are to challenge for supremacy in the coming years - starting with Russia in 2018.

A QUESTION OF STYLE

Luis Aragones' tiki-taka methods helped Spain to their first major title in 44 years when they won Euro 2008. Del Bosque embraced and refined it, turning them into world and European champions with a brand of football that gained admirers across the globe.

Four years on, that same style is being questioned. Torn to shreds by Netherlands and Chile in 2014, Del Bosque seemed prepared to champion a shift in style for Spain's Euro 2016 campaign, but it was an incomplete job: the pace and direct approach of Nolito, Pedro, Lucas Vazquez and Aritz Aduriz was preferred to the cultured playmaking of Juan Mata, Santi Cazorla and Isco, but the commitment to patient pass-mastery persisted all the way from the win over Czech Republic to the defeat by Italy.

Midfielder Koke had called on Spain to put the "fury" in La Furia Roja before that 2-0 loss to the Italians - a team ruthlessly committed to their coach's methods. Whatever his favoured style, Lopetegui must imprint it with conviction if his players are to buy into his methods enough to mount a challenge in Russia in two years' time.

IKER SHOULD NO LONGER BE PART OF THE FURNITURE

Bidding farewell to one of history's most successful goalkeepers is no simple task, but time appears to be up on Iker Casillas' international career.

The 35-year-old, whose place even in Lopetegui's Porto team came under serious scrutiny, lost out to David de Gea in the race for the starting spot at Euro 2016. Del Bosque's revelation that Casillas consequently made life difficult for the coaching staff suggests that the former Real Madrid captain was one of the few in world football who considered it to be the wrong decision.

Casillas has been an exceptional goalkeeper and a leading figure in Spain's record-breaking era, but he has been shy of world-class calibre for some years now. Taking him out of the picture would give De Gea, Sergio Rico and others the chance to cement their place in the set-up, and would remove some of the unwelcome distractions surrounding his fall-out with the coaches and old disputes with the Barcelona contingent.

After scoring the winner against the Czech Republic, Gerard Pique's celebration in front of the Spain fans was pointed. Further booing and whistling in the warm-up matches and even a handful of jeers prior to the first Euro 2016 game had him riled.

Enough is enough. Pique has been a cornerstone of Spain's success, not to mention the astounding trophy haul enjoyed by Barcelona in recent years. Granted, the 29-year-old's social media antics and alacrity to stir the tension make him far from blameless, but his political stance has never impacted his performance levels for his country and it should not be used as a stick with which to beat him.

The saga has become a tiresome subplot to international football and has fostered a disconnect between fans and team-mates supportive of Pique. While there is no easy answer to the antagonism around Catalan independence, or indeed the long-running ill-feeling between the Barca and Real Madrid camps, Lopetegui - who played for both clubs during his career - needs to find a way to bring the Pique matter to a close and get the supporters back on his side.

MORATA THE MAN OF THE MOMENT

His club future may be a little obscure, but Alvaro Morata's importance to the future of Spain could not be clearer.

The striker, now back with Real Madrid after two productive years at Juventus, scored three times for Spain at Euro 2016 as the trusted spearhead of an attack that Del Bosque had accepted was in need of an imposing target. He is the man around whom to build the side in the final third.

Diego Costa has so far failed miserably at international level and Aduriz will be 37 by the time the next World Cup starts. Morata, whether he stays at Madrid or not, has the potential to become one of the continent's leading centre-forwards in the next two years.

Given that Morata won the Under-19 European Championship under Lopetegui in 2011, the new coach has no better solution to the number nine conundrum.

Spain have bade farewell to a number of heroes from the 'golden generation' in recent years. Carles Puyol, Xavi and Xabi Alonso have retired; Fernando Torres, David Villa and Casillas could all follow suit soon.

Lopetegui still has a core of senior stars at his disposal - Andres Iniesta and David Silva proved in France that they are far from finished at international level - but the need to incorporate more of the new generation ahead of the next World Cup is a pressing one.

In truth, Lopetegui's appointment looks to have been made with this in mind. He took the U-19 and U-21 sides to European titles in 2011 and 2013, working with De Gea, Marc Bartra, Koke, Thiago, Isco, Saul Niguez, Denis Suarez and Morata among others.

De Gea's place is now beyond question, but Hector Bellerin, Thiago, Saul, Koke, Isco, Oliver Torres, Santi Mina, Gerard Deulofeu and Munir El Haddadi are part of an enviable list of rising stars who must be given the chance to impress when the qualifiers for Russia 2018 start in September.

In Lopetegui, Spain have the right man to give them their shot.