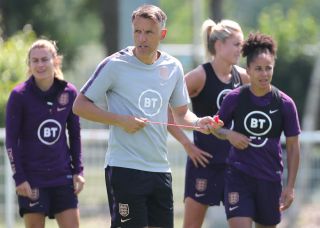 England boss Phil Neville can see in his players’ eyes that they are relishing the prospect of Thursday’s Women’s World Cup quarter-final against Norway.

Neville feels that ahead of the contest in Le Havre the Lionesses look “relaxed, happy and ready to win.”

The 42-year-old, who was appointed to the job 18 months ago, said: “We have put a lot of pressure on ourselves from day one, and we did that for moments like (now), so they are used to the pressure and expectation.

“We have not changed anything. We have not got to a quarter-final and then started doing things differently. The routine, the consistency, is something that I have had all my life, that’s given me comfort. and it’s given the team comfort.

“The look in their eyes – every big game that comes, it looks like they want it even more. And I am a big believer in looking in their eyes.

“They look relaxed, they look happy, and they look like they are ready to win.”

He added: “At the moment things are going well and we have got real momentum.

“We don’t think about losing. My wife thinks about that – she thinks about what ifs. But my what if is: we have prepared them well, we are in good shape, we’ve played four, won four, three clean sheets. Form is good.”

The Norway match comes four days on from the ill-tempered last-16 clash with Cameroon in Valenciennes that Neville’s side won 3-0.

FIFA opened disciplinary proceedings against Cameroon on Wednesday over their behaviour in the game, which saw them twice remonstrate with the officials at length and look as if they may not play on after VAR decisions went against them.

Cameroon also dished out some rough challenges, and England’s Toni Duggan was spat on.

Neville spoke afterwards about feeling ashamed of Cameroon’s antics, while proud of how his own players handled things.

He says they were “in a state of shock” following the match, and has revealed that Football Association chairman Greg Clarke subsequently gave a speech to them in the team hotel, commending their behaviour.

“I think after the game they were all in a state of shock, but they were in the zone,” Neville said.

“We got back to the hotel and Greg Clarke came in and he made a fantastic speech to the players in terms of their behaviour and how important that was in such difficult circumstances.

“And then I think they started to probably process actually what they’d experienced on the field. And then they probably thought ‘you know what, we were mentally in the zone there – we were mentally strong.’ And
that’s another barrier they have overcome.

“He just said well done under difficult circumstances. ‘You carried yourself, you showed great humility and you stayed in the zone and focused on what’s important, winning a game of football.’

“I think that was when they realised actually they should be proud of the way they behaved because ultimately they were fantastic.”