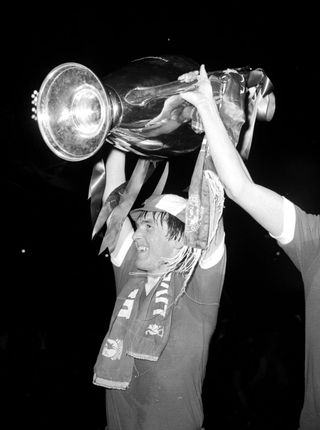 Liverpool stepped out at Wembley Stadium as reigning European Champions having won the trophy for the first time in Rome a year earlier.

While five of their starting XI – captain Emlyn Hughes, Ray Clemence, Terry McDermott, Phil Neal and Jimmy Case – had also played in the previous success, the side had undergone considerable strengthening ahead of its defence.

In came three Scotsmen who would go on to forge distinguished careers at Anfield – Alan Hansen, Graeme Souness and Kenny Dalglish. Ninety triumphant minutes against Club Brugge would help build their reputations, though a wayward back pass from Hansen almost rewrote the script.

His countrymen came together for the decisive moment of the game after 64 minutes, Souness’ pass locating Dalglish in the box and the former Celtic star lifting his shot over goalkeeper Birger Jensen to settle a tight contest.

Reds manager Bob Paisley criticised the Belgian side’s negative tactics after the match, while counterpart Ernst Happel had some barbed comments of his own, but the joy on Dalglish’s face as he toasted becoming a European champion told a happier story.