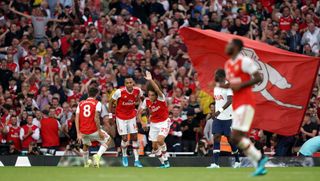 Pierre-Emerick Aubameyang rescued a point for Arsenal as they fought back from two goals behind to draw at home to Tottenham in the first north London derby of the season.

Spurs have not won a league game at the Emirates Stadium since November 2010 and were pegged back to draw 2-2 here having appeared on course to break that duck after Christian Eriksen’s 50th Premier League goal and Harry Kane’s penalty – his 10th goal in his last 10 games against Arsenal – put them in prime position to do so.

But, after mistakes from Bernd Leno and Granit Xhaka had left them vulnerable, Unai Emery’s Gunners fought back, Alexandre Lacazette pulling one back in first-half stoppage time before Aubameyang equalised in a frenetic second half.

Neither side had a particularly good day defensively, despite Jan Vertonghen making his first appearance of the campaign for Spurs, with boss Mauricio Pochettino shifting Davinson Sanchez to right-back after last weekend’s shock defeat at home to Newcastle.

Arsenal also went into the game on the back of a loss, at Liverpool, and Emery responded by starting Aubameyang, Lacazette and big-money summer signing Nicolas Pepe together for the first time.