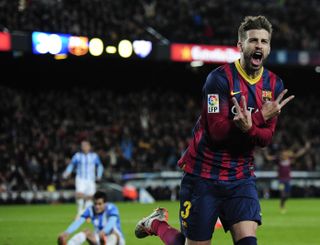 Barcelona returned to the top of La Liga and ended a run of two successive league draws with the convincing home win.

Alexis Sanchez hit the post as early as the sixth minute, but Malaga goalkeeper Willy Caballero was in inspired form and kept the hosts goalless until just before half-time.

Pique finally broke the deadlock, scoring his second goal in as many matches, and Pedro and Alexis added goals of their own after the break.

"It was a game that we dominated from the first minute," Pique told Canal +.

"We scored the goal in the first half, but it should have come a bit sooner.

"Despite the bad times we've had, we've managed to stay at the top. We have a solid team that can stay in first for a long time yet."

Malaga captain Duda said his side acknowledged the task would be tough and bemoaned their failure to take the rare chances they were offered.

"We always knew it was going to be difficult coming here," he said.

"But we've had two or three chances and didn't take them."