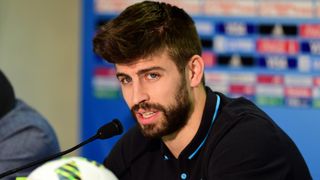 Espanyol loanee Burgui has become the latest to speak out against the behaviour of Barcelona defender Gerard Pique.

Spain international Pique has become embroiled in a spat with Real Madrid defender Alvaro Arbeloa, who accused him of being "obsessed" with the capital club after he appeared to mock their expulsion from the Copa del Rey.

Esteban Granero also called on Pique to show more respect following the incident, in which he tweeted a series of laughing emojis following Madrid's failure to recognise that Denis Cheryshev should have been left out of the match with Cadiz due to a suspension.

Pique's outspoken views on Madrid and Catalan independence have caused friction with fans of the national team in the past and head coach Vicente del Bosque stated last month that his latest indiscretion could be harmful to the Spain camp.

Burgui, on loan to Barca's city rivals Espanyol from Madrid for the 2015-16 season, has now issued his own damning verdict on the 28-year-old centre-back.

"He's a good footballer but he leaves a lot to be desired as a person," the 22-year-old told Deportes Cuatro.

Burgui could be in direct competition with Pique as Espanyol welcome Barca to Cornella El-Prat on Sunday.