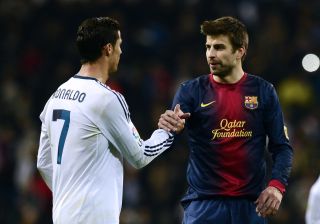 Ronaldo and Messi are widely regarded as the two best players in world football and are set to renew acquaintances when Barcelona host Real in the first Clasico of the season on Saturday.

Barca striker Messi has beaten Ronaldo to the last four Ballon d'Or titles and the duo appear poised to be in the running for this year's prize, with the shortlist set be announced next Tuesday.

Pique - who is a doubt for the 'Clasico' with a hamstring injury - played with Ronaldo at Manchester United before moving to Barca in 2008, and he believes that the on-going competition with Messi has brought the best out of the Portugal international.

"In addition to his work, I think the rivalry with Leo Messi has made him (Ronaldo) even better," he told Kicker.

"I've always admired him, because he is a worker, a machine."

Messi and Ronaldo are level in the goalscoring charts in La Liga this season with eight apiece.