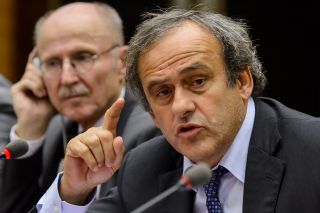 City midfielder Yaya Toure claimed he was subjected to abusive chants from sections of the crowd during Wednesday's UEFA Champions League Group D clash at the Arena Khimki.

And UEFA president Platini has now called for an internal probe from the European governing body to determine why referee Ovidiu Hategan failed to halt the match after Toure revealed that he had made the Romanian official aware of the alleged abuse.

A statement on UEFA's website confirmed: "Further to the opening of disciplinary proceedings against PFC CSKA Moskva following the alleged racist behaviour of some of their supporters at the UEFA Champions League match between CSKA and Manchester City FC on 23 October, UEFA President Michel Platini has requested that the UEFA administration immediately conduct an internal investigation to understand why the three-step protocol established to deal with incidents of a racist nature was not implemented."

The protocol was introduced in order to enable referees to first of all stop matches and request an announcement over the public address system for supporters to "immediately desist from such racist behaviour".

If the behaviour continues, the referee is expected to suspend the game for "a reasonable period of time" and ask the players to return to the dressing rooms, with another announcement then made to spectators.

Should that fail to stop the racist abuse, the referee should abandon the game as a last resort.

UEFA will reveal the outcome of the internal investigation on October 30 when their independent Control and Disciplinary Body have dealt with the disciplinary case against CSKA.