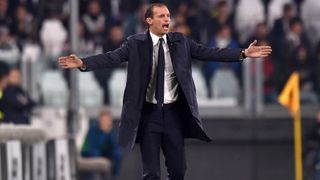 Massimiliano Allegri slammed Juventus for what he considered to be lapses in concentration in their 4-1 Serie A win over SPAL.

Stunning strikes from Bernardeschi and Dybala put Juve in control inside 22 minutes but Alberto Paloschi gave the struggling visitors a lifeline before the break, and they thought they had made it 2-2 through Marios Oikonomou, only for the goal to be ruled out for offside.

Juve's last home game in the top flight ended in a 2-1 defeat to Lazio after they surrendered a lead and missed a last-minute penalty, despite having controlled the game for much of the first half.

And Allegri saw too many similarities with that game on Wednesday, warning his players to expect a defeat against AC Milan at San Siro on Saturday if they do not show some improvement.

"If we play like this at San Siro against Milan, we will certainly lose," he said to Mediaset Premium.

"We still haven't worked out that it's nice to score good goals but that we've got to keep the intensity and concentration up.

"We got ourselves into trouble and SPAL did well to get back into the game. In the second half, we took a big risk with Alberto Paloschi and fortunately it was offside.

"We have to find a balance or it will be difficult to win the title. We don't just want to attack or defend, but maintain a balance.

"After going 2-0 up, there were three mistakes, one after the other, SPAL were able to control the ball. Anything could have happened if it had got to 2-2. You cannot afford that against the bigger clubs. Look what happened to us against Lazio.

"I'm very demanding when it comes to this and the boys will understand it."

He added: "I hope this is the last time that I will have to throw my jacket to the ground [in anger]. I'm getting older. The boys are good but they have to be more careful."