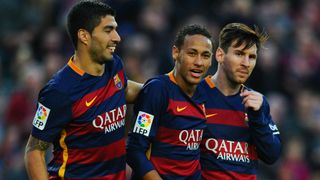 Barcelona's star power means many players are turning down the opportunity to sign for the Catalan giants, according to technical secretary Robert Fernandez.

Spanish champions Barca have made three signings this off-season, bringing in Lucas Digne and Samuel Umtiti, as well as using their buy-back clause for Denis Suarez.

However, Fernandez revealed several players have rejected the advances of Barca in recent weeks, citing one important reason.

"We have such a good team that it's difficult to sign players, we have a top team with a brilliant dressing room," he said.

"Everything is calibrated, but there are certain signings you can't even begin to broach.

"There are players who don't want to come to Barcelona."

More specifically, Fernandez says attacking players are turning the club down due to the famed 'MSN' trio of Lionel Messi, Luis Suarez and Neymar.

"It's very hard to convince players to come here with the three we have up front," he lamented.