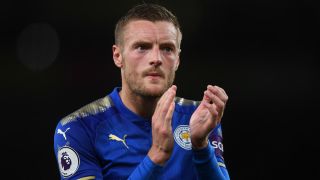 Leicester City star and England international Jamie Vardy is open to leaving the club, with a move abroad also on the agenda.

Vardy – under contract until 2020 – turned down a move to Arsenal after guiding Leicester to a remarkable Premier League triumph in 2015-16.

The 30-year-old has hit the ground running this season, scoring twice against Arsenal on the opening day of the campaign, but a transfer away from King Power Stadium could happen, having watched former team-mate Danny Drinkwater join N'Golo Kante at Premier League champions Chelsea.

"I want to win as much as possible," he said. "I don't want to only have one Premier League medal in my drawer at home - it would be an empty glass cabinet.

"I'm contracted to Leicester and we will see how high we can go. In the future, who knows?

"Just because I turned down Arsenal, that was my choice, but if another offer came in it would be the same in that I would look at it and work out the pros and cons.

"But no, turning down Arsenal doesn't mean I wouldn't look at another offer."

On rejecting Arsenal, who won the FA Cup last season, Vardy added: "It wasn't the Premier League was it? So we're all right with that I think.

"I'll never regret anything I've chosen to do. I'm a bit of a psychic, I could see the little downfall they are on now.

"They had qualified for the Champions League for the last 20 years until last year. That was something to think about.

"But there were all sorts of reasons. Football was the main thing, but moving the family when I'd just bought a house would have been a laugh - not."

Playing abroad could also be an option for Vardy, who said: "That would be something I'd probably like to experience. A different culture. I've spoken about it with my agent [John Morris] in the past. We'll have to wait and see what happens."