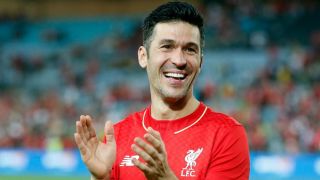 Luis Garcia said he did not have a return to professional football on his mind before announcing he would come out of retirement last week.

Garcia was presented by A-League outfit Central Coast Mariners on Thursday as their marquee star for the rest of the 2015-16 season.

The 37-year-old had initially retired at the end of 2014 after playing a season with Indian Super League side Atletico de Kolkata.

As for playing on beyond this season, Garcia said he would decide come the end of the season.

The Spaniard was a cult hero at Anfield and also participated in the club's remarkable comeback in the 2005 Champions League final against AC Milan.

Garcia was in Australia just a fortnight ago, joining Steven Gerrard and a number of former Liverpool legends in an exhibition game.

"There is a huge, massive fan-base here in Australia for Liverpool," Garcia said.

"I’m honoured. Every time I’ve been here they treat us very well and hopefully we can bring along more [Liverpool fans] to watch the games and of course our fans are very happy."

Garcia is eligible to play on Saturday against Western Sydney Wanderers, but said it was up to coach Tony Walmsley to decide if he should take to the park.

"It depends on the coach, he is the one who decides but if the coach thinks I'm ready to play, I’ll be able to," he said.