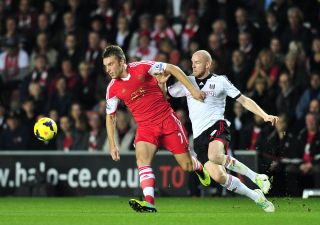 Lambert was left out of Southampton's starting line-up for the Premier League clash at Manchester United last weekend, but he was recalled against Fulham on Saturday, and scored in their 2-0 win.

The 31-year-old also set up Jay Rodriguez's goal as Pochettino's side continued their excellent start to the season, moving third in the Premier League.

Lambert put in a typically combative display in which he also hit the post and Pochettino challenged the striker to kick on in order to ensure he keeps his place in the England squad for the tournament in Brazil after playing his part in qualifying.

The Argentinian said: "I've been saying for a couple of weeks Rickie Lambert is an amazingly important player for Southampton.

"He showed today how good he is and hopefully he can keep on putting performance as he did today and that will more than likely take him to Brazil."

However, Pochettino stressed that it is not individual performances that have propelled his side up to third in the table.

He added: "I want to congratulate the players because they put in an extraordinary performance today.

The Southampton head coach played down his side's lofty position in the table and stressed there is still room for improvement.

He said: "I don't know (if they can stay so high up the table). I've been saying for a couple of weeks now that the sky is the limit.